The versions of libraw and dcraw currently in the Ubuntu repos have a slight problem. When accessing RAW files from Canon's latest 650D, they display them entirely in pink - which probably isn't what you want.

The problem is simple enough: the versions of dcraw/libraw used by all the RAW processing apps in Ubuntu 12.10 (aside from eog - so Shotwell, UFRaw, RawTherapee, etc.) don't have the 650D listed yet, so the ICC profiles aren't getting properly interpreted.

One solution is to rebuild your applications, such as Shotwell, with the appropriate versions of the underlying raw libraries. That can be a pain, so I took the easier option, and opted to convert the images to JPEG first, thereby circumventing the issue.

Thereafter, you should be able to use the primitive alias rawtojpg to convert all .CR2 files in the current directory to JPEGs (leaving the original CR2 files as-is). Note the -P 8 flag, which runs 8 conversion threads in parallel - adjust as appropriate. You can obviously change the alias to a proper function which takes some args too, but the above was sufficient for my purposes. 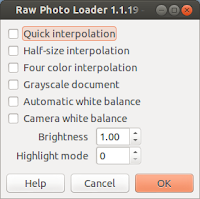 See my comment below for a complete solution to this problem.

Assuming you've already followed the preceding instructions in this post, all you need to do is install gimp-dcraw; then you'll be able to open your 650D CR2s with GIMP:

Posted by Unknown at 13:41 No comments: Links to this post

Email ThisBlogThis!Share to TwitterShare to FacebookShare to Pinterest
Labels: Ubuntu

Has the Apple bubble burst?

This week, the Apple share price tanked. In one day alone, it lost market capitalization of some 35bn USD.

Apple Inc. hit its all-time peak in September after stunning growth in the 1st quarter of 2012. Since then, it's just been sliding back downhill (barring a brief reversal in the last half of November, which has just been wiped off the board this week).

I'll leave the detailed analysis for others, but there are a few drivers from the tech side that seem worthy of comment.
Does Apple still have some cards hidden up its sleeve, or is it floundering precariously on the proverbial ledge, mourning the loss of direction from its most inspirational and charismatic late leader?
Posted by Unknown at 01:51 No comments: Links to this post